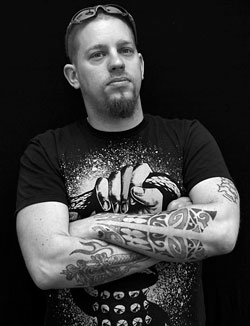 Ben Boston is first and foremost an artist. He was born in Bristol in 1976 and was very obviously a creative. His work was first exhibited in 1982 at the tender age of six, when he earned the honour after competing with his peers in the south west. His family recognised his talent and always encouraged him, with his grandfather bringing him artists' materials from his job. As a child he had no interest in sport and such activities, but would prefer to create drawings and models. He loved watching art television programmes especially those by Tony Hart which he found highly inspirational. Ben was not academic and found little pleasure in attending school, other than art lessons and left as soon as was possible. He went on to study art at Brunel and Filton colleges. He took a Saturday job at a chemist shop and soon realised that he could not spend his life working in such an environment and was strongly motivated to make his living from his art.

In 1996 he got together a portfolio of his work to date and trawled tattoo conventions and tattoo shops in the area. The previous owner of The Tattoo Studio was very impressed with his work and agreed to take him on as an apprentice tattooist. Ben took to tattooing like a duck to water and was soon creating fabulous body art. In 1998 the previous owner decided to leave the country and Ben was faced with a bleak choice – buy the shop and run it or try and find someone else to work for. Whilst his work was first rate, he was only young and it is a hard world to break in to. In the end with the help of his good friend Steuart Kingsley, who had been running an exhibition company, they took over the business. Steuart had put on a number of successful tattoo conventions throughout the country, so was confident that with Ben's obvious talent, they could make a go of it. It was very tough to start with, but word got around about the young tattooist in Cheltenham road and the business has grown to the point where there is a not inconsiderable waiting list for his work. Ben is constantly pushing himself to produce better and better tattoos, each one more challenging than the last.

Ben lives with his wife Helen who has been his supportive partner and best friend of ten years. He says that she inspires and encourages him and he cannot imagine a world without her. She is also an artist working in oils and pottery.

Ben is a keen motorcyclist and has a Honda which he has personally customised to his design.

In his spare time, Ben likes nothing better than to paint in acrylics on canvas. When Ben took a few canvases to the shop, his customers were blown away by them and started requesting prints. He has now started reproducing limited edition prints of this work and they have been selling well through the Tattoo Studio and various businesses up and down the Gloucester Road. There are some of Ben's paintings on the 'Ben's Art' page. Ben is currently painting like a demon as he wants to put on an exhibition of his work next year.

Ben is very laid back and likes to interact with his customers, who often become friends. He says that he has the best job in the world as he is paid to do what he enjoys doing best.